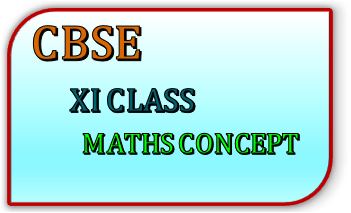 This note is designed by ‘Basics in Maths’ team. These notes to do help the CBSE 11th class Maths students fall in love with mathematics and overcome the fear.

∗ Sets are usually denoted by capital English alphabets like A, B, C and so on.

∗ The elements in set are taken as small English alphabets like a, b, c and so on.

• If any object belongs to a set, then it is called objects / elements. We denote by ∈ to indicate that it belongs to. If it does not belong to the set then it is denoted by ∉.

In this form all the elements of set are listed, the elements are separated by commas and enclosed within braces { }.

Pointing an element in a set to x (or any symbols such as y, z, etc.) followed by a colon(:), next to :  write the properties or properties of the elements in that set and placing in a flower brackets  is called the set builder  form.: Or / symbols read as ‘such that’

Null set: – (empty set or void set) the set which has no elements is called as null set. It is denoted by ∅ or { }.

Equal sets: – two set A and B are said to be equal sets if they have same elements., and write as A = B

Power set: – set of all the subsets of a set A is called power set of A. It is denoted by p(A).

Universal set: – A set which contains all the subset of it under our consideration is called universal set.

Equivalent sets: – two set A and B are said to be equivalent sets if n(A) = n(B) (they have same cardinal number).

U = {1, 2, 3, 4, 5, 6}
the relationship between sets are usually represented by means of diagrams which are known as ‘Venn diagrams. These diagrams consist of rectangle and circles. Universal set is represented by rectangles and subsets by circles.